Wanted to give a quick plug for Open Studio, a great site that features jazz lessons from world-class artists that you can take at your own pace.

I’ve personally purchased courses by jazz drummers Ulysses Owens Jr. and Gregory Hutchinson. I even bought a course by pianist Peter Martin after getting a keyboard and wanting to dive deeper into jazz theory.

I can’t say enough about the quality of the courses offered. They’re worth every penny and you can check out a sample lesson on any of the course pages.

If you decide you want to get one of the courses, here’s a link that will get you $30 off. Full disclosure: I’ll get a credit I can use toward other courses if you do use that link.

I was sad to learn of the passing of Marv Dahlgren last week. I was fortunate to see him last year in the audience for a jazz show by a couple of his former students, Phil Hey and Dave Hagedorn. They made a point of introducing him and the whole audience gave him a standing ovation.

What can be said about his influence on the drumming community? Marv was a beloved percussion instructor who authored and co-authored many influential books on drumming including 4-Way Coordination, Accent on Accents, and Drumset Control.

Many of Marv’s out of print books can be found at Really Good Music.

Marv was the former principal percussionist and assistant timpanist for the Minnesota Orchestra.  In addition to the albums he has made with the orchestra, Marv has also recorded with Cat Stevens and Leo Kottke and has performed on many jingles. Marv was also known as an excellent mallet player and performed on vibes with his own jazz group in venues around the Twin Cities.

He has performed as a soloist with the MN Orch and played with many of the legends of Jazz including Oscar Peterson and Doc Severinsen.

Dahlgren, Marvin D. Age 93, lifelong resident of the Twin Cities, passed away at his Roseville home on Friday, April 6, 2018 while in hospice care. Remaining independent almost to the end, his was a life lived to the fullest. He will be greatly missed. Marv leaves a legacy of achievements that is hard to sum up in a few words.

He was an iconic figure in the local and national music scene, both as a consummate orchestral and jazz performer and as a teacher and clinician. His career included a nearly 50-year tenure as principal percussionist and assistant timpanist with the Minnesota Orchestra, teaching positions at various universities, and appearances as a drummer and vibraphonist with local and national jazz greats.

He was a soloist with the Minnesota Orchestra and the Dallas Symphony, and has many recordings to his credit. Marv was also the owner of a drum shop, author of numerous well-known drum method books, and composer of jazz tunes.

In addition to his musical activities, Marv spent 20 years in the Navy, first in active duty as a Corsair fighter pilot during WWII and later in the Navy Reserve. Flying remained his passion even after he retired as lieutenant, and he went on to teach acrobatic flying in his spare time.

Marv touched the lives of countless people, not only through his many talents but also with his engaging personality and pleasant demeanor. There was always a twinkle in his eye, a story to be recounted, and a joke to be told. He had a generous spirit, giving freely to multiple charities and chairing and/or organizing hunger relief benefit projects.

A musical Celebration of Life is planned for Sunday, June 17 from 1-5pm at the MacPhail Center for Music, 501 S. 2nd Street, Minneapolis. His final resting place will be at Fort Snelling in honor of his military service. In lieu of flowers, memorials are preferred to one of the following organizations: Second Harvest Heartland, MacPhail Center for Music, American Heart Association.

There are a couple of new videos up on Youtube that I discovered last week that lead me to an amazing resource: The Howard University Jazz Oral History Project. Some great stuff there.

A couple days ago I posted the Max Roach interview. The next video I want to share is a one hour interview with Philly Joe Jones. It’s full of great stuff and like Max, he also plays some piano during the interview.

The video abruptly flips over to a Sphere concert with Charlie Rouse, Kenny Barron, Buster Williams and Ben Riley around the one hour six minute mark, cutting off the interview. There are audio clips of the interview here, which seem to extend beyond the length of the video, though I haven’t listened in full yet.

There are a couple of new videos up on Youtube that I discovered last week that lead me to an amazing resource: The Howard University Jazz Oral History Project. Some great stuff there.

The first video I want to share is a one hour interview with Max Roach. It’s full of gold. He not only plays drums and piano, he also shares stories dating back to his days playing in parades as part of his church band.

Wanted to give a quick plug for a piece of Mac software I find really useful. If you’re like me, you keep A LOT of music on your hard drives. I had a hard time keeping track of it all until I started using DiskCatalogMaker. 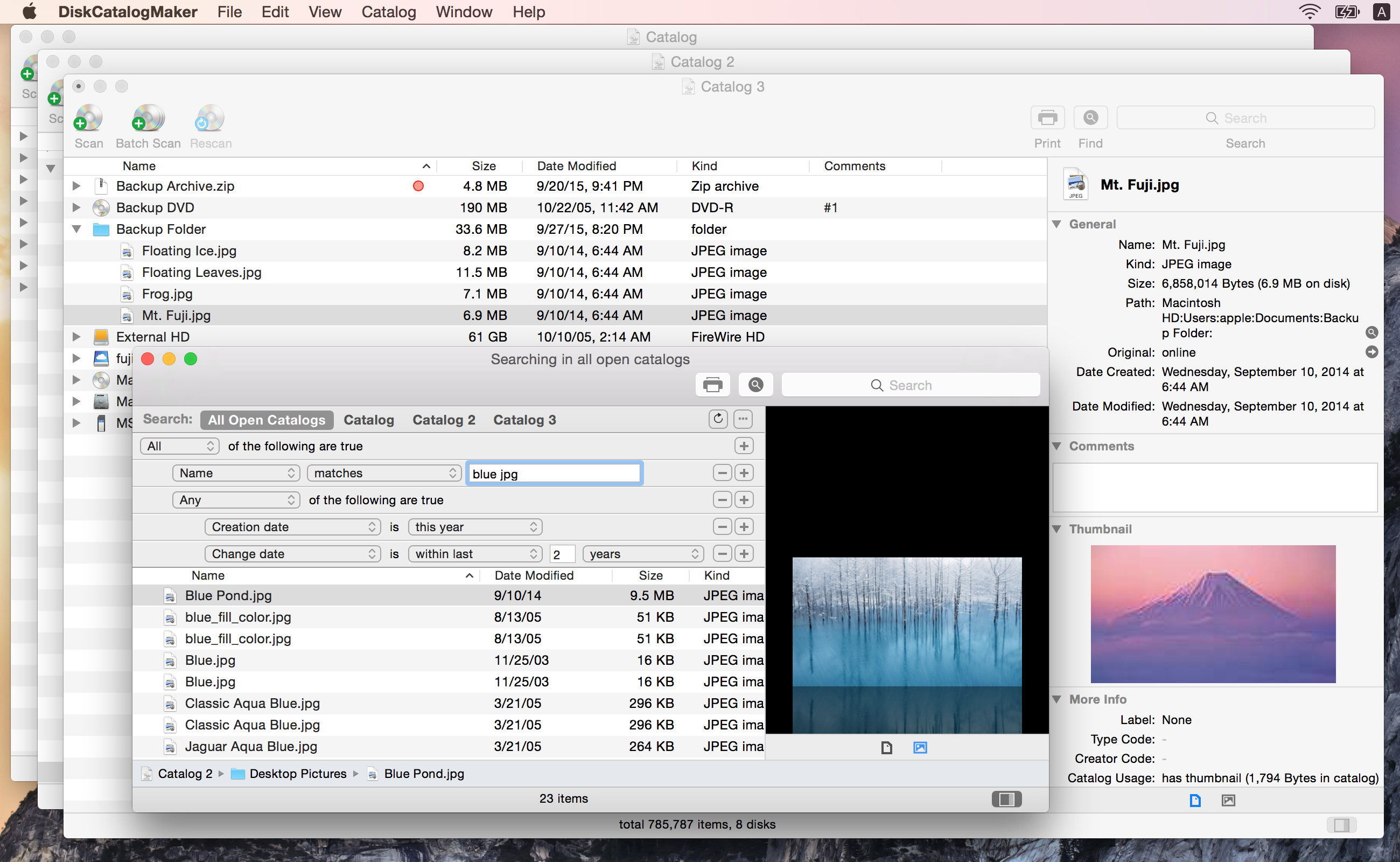 What I like most is that once you make catalogs of your hard drives, you can search the catalogs without having to hook up the hard drives. It saves me so much time, since I have music stored across several large hard drives.